Keep your Kardashians and Biebers, strange northern people, when we twitterfight down here we do it with Presidents

Earlier today Acting President and presidential candidate for the real job in Venezuela (the one left vacant by the demise of a certain Chávez fellow, you might have heard), Nicolás Maduro upped (lowered?) the tone of the campaign by using the H word about his rival. Yup, he trod where those wishing to cause a spat tread, calling Henrique Capriles and his band of opposition players "the heirs of Hitler".

On hearing that, ex-Prez of neighbouring Colombia, Alvaro Uribe, (no stranger to the right wing of the political world himself) couldn't keep his tongue tied down and tweeted to his 1.87m followers: 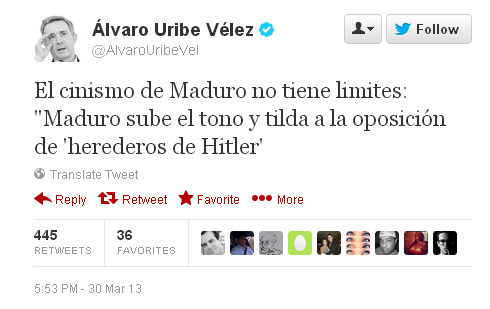 His line being, "The cynicism of Maduro has no limits".

But Maduro just waded right in on Uribe, too: 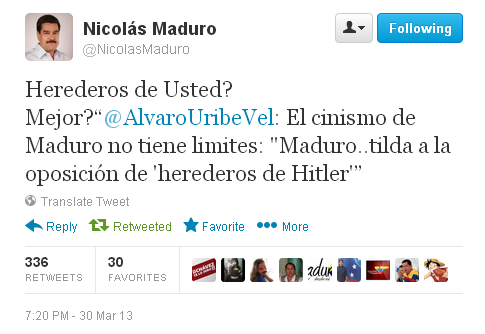 His comeback to his 541k followers (he's new on the twitter block):